Besides the healthiness (or not) of bakery products such as muffins and scones, which are often eaten in their own right, there are other bakery items we often use in a sandwich style manner such as bagels and croissants.

So how do these compare to a traditional bread-based sandwich? 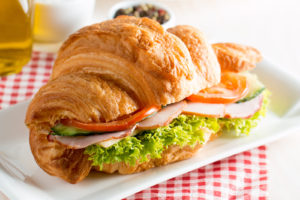 When we think of a croissant, we may conjure up sitting at a café in France sipping a coffee and eating a delicate flaky crescent-shaped pastry that has just been baked. (In essence, however, the croissant is actually of Austrian origin.)

The croissant we often see in New Zealand – either in packets or in the takeaway cafes – can be a far cry from the delicate French morsels in taste and texture. Nevertheless, as can be seen from the table below, they maintain a high fat content due to the amount of butter used in their making. Unfortunately, also, many of the croissants sold are also filled with high fat fillings such as camembert and ham. The idea, therefore, is to pack the croissant with salad and a very lean meat to compensate for their fatty content 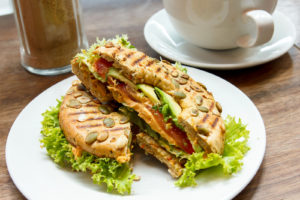 According to most sources, bagels ‘arrived’ in New York when many Jewish immigrants came into the county from Eastern Europe. In the 1960s, more bagels were produced to keep up with the growing demand and hence they became a commercial entity.

As can be seen in the table below, bagels are more energy (calorie) dense than bread, and the plain white ones have half the fibre content of wholemeal bread. Bagels have a slightly higher protein content, but from a nutritional perspective the idea is to use healthy fillings such as hummus and salad, lean meat and chutney, smoked salmon with cucumber – not to smear them with cream cheese.

Overall, a wholewheat bread sandwich with a nutritious filling is the best option, but bagels certainly can be an alternative. Bagels are also great split in half and toasted. Just remember that their energy content is higher than wholemeal bread and their fibre lower.