Having a coffee with a muffin (or scone, but that’s another story) seems a well-entrenched habit for many people. Often consumed as a takeaway, the two are either eaten instead of breakfast or as morning tea. But do we really know what’s in a ‘muffin’ – and whether it’s ‘healthy’ or not?

There are basically two types of muffins: 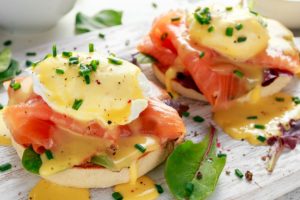 Many Victorian households had their fresh foods delivered. Muffins in those days were often delivered by a muffin man. Many of us will know the song ‘Do You know the muffin man who lives in Drury Lane?’. There are many references on the web around the origins of this song and what it might mean which are fascinating to read).

Although there is some differing opinion on whether this is where the traditional English muffins as we know them originated from, what we do know is these muffins tend to be small, round and flat, and often leavened. The idea is to split them horizontally. They can be toasted and buttered, have a sweet topping added but they are also good as a basis for a cooked breakfast. Many recipes such as Eggs Benedict use split muffins as a base.

Nutritionally, depending on how they are made, they are often not dissimilar in make-up and calories to many breads – averaging about 135 calories (564kJ) for 60 grams, with most of the energy coming from carbohydrates. They do not traditionally have much in the way of butter, eggs, oil and other ingredients such as fruits added to them, although some recipes flout this.

Therein lies the difference nutritionally and energy-wise to the potentially high-calorie laden American muffin which is the more predominant type in New Zealand. 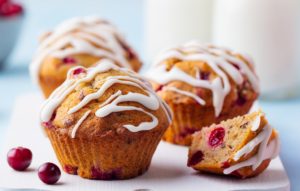 The consensus is that these originated in America in the mid-1900s. The idea was that they were made more like a quick bread and similar in size to a cupcake, but were not designed to be sweet and dessert-like, as were the cupcakes.

As we should know, a good healthy ‘American’ muffin should be small, whole-wheat based, with the addition of maybe apple, bran, banana, and nuts. Such a muffin, at around 60grams, has an energy content of about 180kcal or 753 kJ.

But how many muffins, especially in shops, are like this?   Has the word muffin got such good connotations that we deny what we may be eating – which are fat- or sugar-laden ‘cakes’ full of chocolate, or feta and bacon.

No: Large refined muffin with large full fat latte = approximately 750 kcal or 3,138kJ with too much fat and/or sugar

Note: The energy levels quoted above are approximate due to the high variation in how bakery products are made.